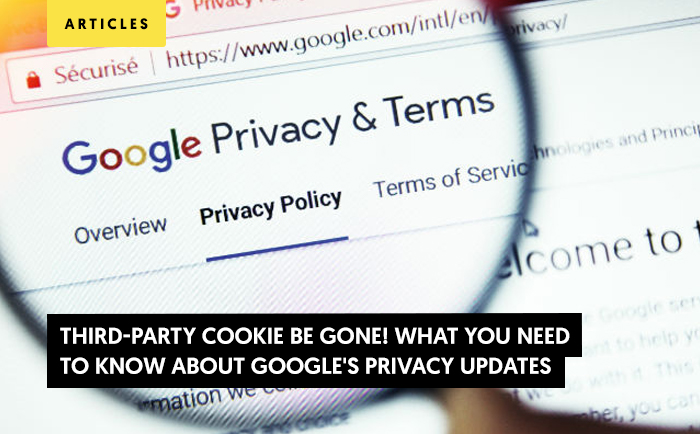 If you’ve implemented digital marketing into your company strategy or established a successful online platform you’re probably familiar with third-party cookies. And no, we are not referring to the sweet goodies you can find at bakery stores across the world. In the digital marketing context, third-party cookies are simple pieces of code that help track user behavior throughout the internet.

In February 2020, Google announced a series of changes to create a safer environment for consumers and the industry as a whole, including the elimination of third-party cookies from Chrome.

At lemonads, we work closely with a variety of advertisers and publishers, so we understand the magnitude of the impact this change will have. We’ve also taken the time to research the next steps stakeholders need to take and figure out how Google is helping publishers mitigate the blow. Below, we’ll go over our findings and tell you the 5 most important things you should keep in mind during the phase-out of the third-party cookie.

While Google officially announced its plan to eliminate third-party cookies in early 2020, it’s important to understand that the privacy movement has been gaining momentum for a while. Google users have been demanding better privacy features in their products for years and the company is now transitioning to an environment where consumers feel more in control.

Not only this, but popular browsers like Firefox and Apple’s Safari phased out third-party cookies a while ago, leaving Chrome as the odd man out. That said, Google made it clear that the reason why it didn’t follow suit as soon as other browsers made the switch was to prevent the destruction of tech companies that rely on Chrome's data to stay afloat.

Plus, the number of Chrome users is far greater than Firefox and Safari combined. So, it makes sense that the company has taken a bit longer to ensure all of its partners remain successful while making consumers happy.

The Phase-Out Is Delayed -- But It’s Coming

During its initial announcement, the team at Google announced that cookies from third parties would be discontinued as early as 2022. Instead, the company has announced that the phase-out will take place over three months starting in mid-2023 and running until close to the end of the year.

The discontinuation of these cookies is part of a bigger initiative called the Privacy Sandbox and its goal is to develop online technologies that protect privacy while also giving digital stakeholders enough information to thrive online. In the name of transparency, Google has shared all of the rigorous phases of the public development process. This is consistent with open-source platforms that are considered the pinnacle of transparency.

Over the last decade, we have seen major changes to online advertising regulations, which in turn have altered the digital promotion landscape permanently. It’s no surprise that the prospect of Google removing third-party cookies has sent the entire online advertising industry into a frenzy.

But, even though this will alter the way affiliate advertisers and publishers do business online, it’s important to note that these stakeholders can adapt to the new standard. And, the faster you do this, the higher your chances of being successful.

Let’s put it this way: when data-driven online marketing first emerged, it took some time for advertisers, publishers, and networks to figure out how the ecosystem worked. This means that the stakeholders that focus on learning how to succeed without third-party cookies will have an advantage over their competitors.

Let’s go over the 5 most important elements you should keep in mind to prepare for the death of the third-party cookie.

A lot of advertisers and publishers panicked when they first heard this news because they imagined all of their cookie-based activities disappearing. But, you take a deep breath because the change will only affect cookies that come from third parties. In other words, you can still use first-party cookies to collect basic data about visitors.

And, of those of you concerned about the safety of the first-party cookie, Google has already clarified that these are essential for user experience. Which, in plain language, means they are not going anywhere. So, you will still be able to leverage the data collected by the first parties.

First-party cookies are placed on a user’s computer whenever a person accesses a website. Most businesses and website owners use this type of cookie to remember passwords, user preferences, and other elements that help create a seamless experience. This in itself reveals what users do on your site, how long they stay for, the duration of their session, and how often they come, among other details.

Even though you can’t see what users do on other websites (which is basically what third-party cookies do), you can leverage first-party data to understand your audience as a whole. You can even create different segments based on location, browser type, language, and other variables, so you can see how the different audiences you target behave.

A third-party cookie can be placed on a user’s browser even if this individual did not access the website where the tracking script originates from. As we mentioned earlier, these platforms allow you to track users around the web, so you can see how they behave in sites that are not directly under your domain.

Advertisers and publishers both benefit from cookies, albeit in different ways. Publishers are interested in placing cookies simply because these are beneficial for the advertisers and media buyers they partner with. Advertisers, on the other hand, use third-party cookies to learn about users, the websites being visited, and the relationship between the two.

Regardless of what type of stakeholder you are, this update will likely impact your efforts. Therefore, you need to keep a close eye on the discontinuation of the third-party cookie and start developing alternatives based on first-party data and similar resources.

Yes, it’s a shock that Google is going through with the elimination of third-party cookies. But, it definitely should not come as a surprise as the online privacy movement has been going on for years.

There have been many changes in recent years that pinpointed the potential phase-out of consumer tracking technology like third-party cookies, like the implementation of GDPR laws in Europe.

According to the GDPR ruling, consumers in Europe have to proactively allow platforms to track their behavior, so website owners can’t assume that they are allowed to collect data anymore. They need to receive explicit consent before they start collecting any information.

3. The Change Will Have a Negative Effect on the Industry

It’s no secret that marketers, advertisers, publishers, and ad networks will likely experience a negative impact due to the third-party cookie phase-out. But, the effects of this change go well beyond the financial aspect because they have the potential to alter the entire industry for the worse.

Some leading ad tech specialists have even expressed concern over Google’s motivation for eliminating cookies from third parties. After all, the search giant will still allow extensive targeting in Google Ads, so many believe that the platform is tightening its grip on the online advertising industry.

As a result, the Association of National Advertising and the American Association of Advertising Agencies have written a joint statement asking Google to push back the discontinuation of third-party cookies until more effective alternatives are found.

4. Google Will Still Be Able to Track Users

As we mentioned before, Google is still allowing first-party trackers. This is one of the many ways that Google tracks its users, so even though its monitoring ability will be affected to some extent, the search giant will still be able to keep a close eye on its users.

The company developed FloC, a group-tracking platform that is currently being tested as an alternative to third-party cookies. In a nutshell, FloC tracks user groups that have the same interest, so it never provides individual information about one single user. Instead, it creates a safe environment by hiding single-user data in a large group of people that have similar interests.

We mentioned this previously and we will write it again: advertisers, publishers, and networks that focus on adapting to this change have the upper hand against competitors. Google has already taken the first steps to develop alternatives to third-party cookies and this should encourage stakeholders to do the same.

Besides FloC, Google’s plan also includes the use of dedicated APIs that improve privacy while giving access to data that advertisers can use to succeed.

There is no doubt that Google’s elimination of third-party cookies will have a profound impact on the online advertising industry. With that said, the faster you make adjustments, the higher your chances of becoming successful.

If you want to learn more about changes in the online advertising industry or find out how to develop a winning affiliate program, contact lemonads today and we’ll be glad to help.