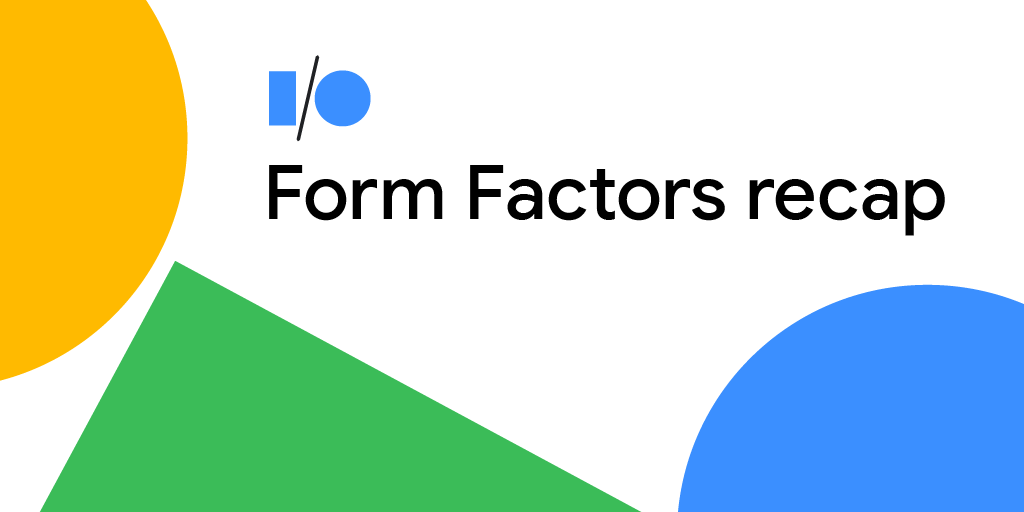 Posted by The Android Team

At Google I/O this year, we talked about how your app can take advantage of Android's different screens, both large and small. But if you missed the show, here are the top things you should know:

It's more important than ever to design your app to work well on large screens — including tablets, foldables, and Chrome OS laptops. There are already over 250 million large screen Android devices in use today. Meanwhile, new foldable devices are making it easier for users to multitask, and opening up new experiences like tabletop mode for hands-free activities. See this example of Disney+ using tabletop mode on the Samsung Galaxy Z Fold2.

Fortunately, it's also easier than ever to design apps which seamlessly scale to adapt to any device size — including dynamically resizing on Chrome OS and foldable devices, taking advantage of Jetpack Compose or ConstraintLayout to build responsive layouts. We also studied how people interact with large screens, like where their fingers are placed, and we’re giving you APIs and Tools to make that experience easier:

We’ve also made updates to the Android platform, Chrome OS, and Jetpack WindowManager, so apps just work better by default. For example, many UI elements now have default Max Width values to make sure they look better on large screens, while changes to the Display API ensure that existing apps continue to render correctly on foldables even if they aren't using WindowManager to query window metrics.

Learn more about how we are helping you build for large screens with these I/O sessions:

For even more details, check out the what's new in foldables, tablets, and large screens article, or read the case study on how Google Duo sees increased engagement and improved ratings.

We announced our biggest update yet to the Wear platform, with new features, APIs and tools to help developers create beautiful, high quality wearable experiences.

There are new Jetpack APIs to help you streamline your development. The Tiles library gives users fast, predictable access to the information and actions they rely on most. Another notable addition is the Ongoing Activities API, which enables you to let your users return to your app after they’ve navigated away (to start some other task such as music playback). Both of these libraries are currently in alpha.

We also released a new set of APIs for health and fitness that act as an intermediary to the sensors and related algorithms on the device to provide apps with high-quality data related to activity, exercise, and health. The alpha of the Health Services platform is available to use today.

Download Android Studio Arctic Fox Beta to try out a developer preview of the new Wear system image and start preparing your apps for the new platform. Check out the I/O sessions below to learn more about these announcements:

You can also read more details on the latest changes to Wear, as well as learn about how Spotify is building on Wear.

Android TV OS now has over 80 million monthly active devices, with 80% growth in the US and is at the heart of the Google TV experience launched last fall. Meanwhile, Google TV itself can be found on streaming devices like the Chromecast with Google TV, smart TVs from Sony, and as an app on Android devices — including tablets.

This year at I/O, we announced several new tools and features to make developing for Android TV OS easier:

These releases make it easier to build and test applications across a range of device configurations, while bringing the latest Android 12, Googler Assistant, and Cast features to the TV. To learn more, watch the What's new in Android TV and Google TV session from I/O.

Android Auto allows applications to connect with the infotainment displays built into many modern vehicles. To make this even easier we recently made the Android for Cars App Library available as part of Jetpack. This library allows navigation, EV charging, and parking apps to integrate directly with compatible cars.